Take 10 is actually meant to represent an average die roll. If you can perform a skill check in a calm situation without a penalty for failure, then you'd most likely get at least a 10 on a die roll within 3 attempts (and any unlucky streak will collapse under weight of retries.) Take 20, on the other hand, does require more that amount of time. Dec 04, 2014  Earlier this week, I wrote about the newly released 5th edition Dungeon Master's Guide and how much I had enjoyed reading through it and uncovering some great tools for creating custom campaigns and adventures. It's time to put the book to the test. And have some fun, obviously. After finishing up with the 5e DMG, I thought it might be fun to try and create a mini-adventure using.

The 5e DMG has a short section on “handling mobs:” it has a chart for approximating, out of a group of attacking monsters, how many monsters hit.

I ran a big set-piece battle yesterday: 8 mid-level PCs and 10 gnomes against 20+ drow and other assorted creatures, including a drow spider chariot and a sinister angel. With a wizard and a sorcerer PC and two drow wizards, all slinging fireballs, the mob attacks weren’t much of a factor. With all those fireballs, what I COULD have used was rules for mob saving throws.

If I’d thought about it, I’d have realized that the same chart can be used for saving throws. Instead of subtracting attack bonus from AC, subtract saving throw bonus from DC, and use the chart as normal. For instance, a fireball save DC of 15, minus the drow dex save (+2) is 13, which, according to the chart, means that 1/3 of the drow succeed on their saving throw (and probably survive with 1 or 2 HP left).

In fact, this same chart can be used for ability/skill checks (how many orcs managed to climb the wall? DC minus skill bonus) or any other d20 roll. 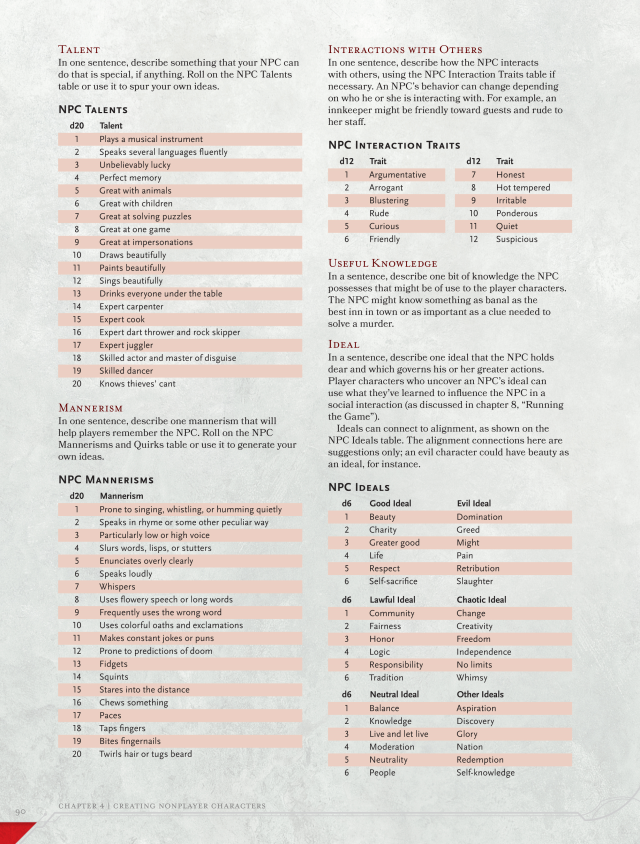 To me, it seems this is all you need to run fairly simple battles with dozens or hundreds of creatures per side. The amount of HP tracking is not excessive: for instance, in this unit of 50 ogres, 24 have 15 damage and the other 25 have 30 damage. (For ease of bookkeeping, assume that melee attacks always target the most-damaged creature.)

You might also care about the base size of big units. I assumed that a close-packed formation of 10 Medium troops took up the size of one Large creature. I’d say that 25 troops are Huge and 50 are Gargantuan.

If we do any bigger-scale battles, I might find other rules that I need (after all, the Chain Mail rules are much longer than this blog post) but right now, this is looking pretty good for running big D&D skirmishes.