A prevention effect is a continuous effect that replaces an event with 'do nothing.' These typically prevent some or all of the damage being dealt to a player or creature. They use the word 'prevent' to indicate they are prevention effects. R&D has scaled back on doing damage prevention, because it adds a lot of board complexity and slows the game down. It's primary in white.[1] A typical example is Samite Healer.[2]

Prevent all combat damage that would be dealt this turn. Clash with an opponent. If you win, creatures that player controls don't untap during the player's next untap step. (Each clashing player reveals the top card of their library, then puts that card on the top or bottom. A player wins if their card had a higher converted mana cost.). I can only give you my top ten green cards. My list in order: 1. Llanowar Elves This guy is all green: he is an elf, he gives mana ramp and he lives in Llanowar. He has been around from the beggining of MTG. Wild Mongrel More than a tournament successful deck was built around this puppy.

From the glossary of the Comprehensive Rules (October 4, 2019—Throne of Eldraine)

From the Comprehensive Rules (October 4, 2019—Throne of Eldraine)

From the glossary of the Comprehensive Rules (October 4, 2019—Throne of Eldraine)

Prevent
A word used by prevention effects to indicate what damage will not be dealt. See rule 615, “Prevention Effects.” 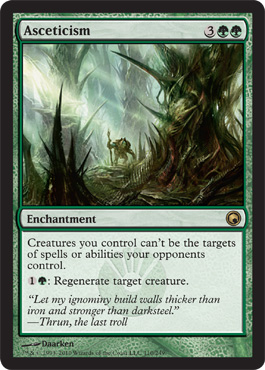