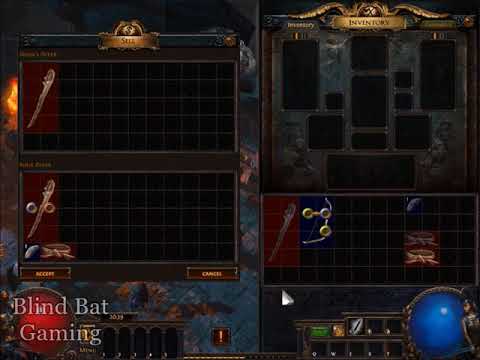 'Raise your hand to the roaring crowd and pledge your allegiance to glory'
The Gladiator takes the hybrid nature of the Duelist a step further, with a combination of speed, power, and protection.

We using dual wield Dreamfeather Sword as core items and make evasion a def and offence stat! We get great buff for Double Strike [Adds (3-113) to (5-169) Physical Damage against Bleeding Enemies] that's make a ton dmg and Bleed damage (we have 8 stack of Bleed so it's work for 7 of them)

Double Strike it'a alot of better for Boss and long fight, Reave it's for mapping but feel free if you want use Reave for boss fight (its work too!). Min maxing say Double Strike for Boss

Vaal skill it's Great for Bosses!

DREAMFEATHER: It's your core items, we stack Eva and get 2% Attack Damage every 450 evasion, Attack Speed, flat Evasion, Movement Speed.

There it's one better Body Armour [The Perfect Form] but it's full Evasion so it's really hard to get 5 Red socket and when we get one we need to change gear and stack alot of cold ress. So its an endgame option for us.

BELT OF THE DECEIVER

Watcher's Eye for Grace it's Really cheap and can give you %Life and some defence node (more Evasion or Blind).

Rumi it's best def flask we can get! Can give us 30% spell block (Versatile Combatant node), Armour, Hit Block
Witchfire Brew and Jade Flas are our DPS/Def boost, so it's great!

DPS it's wrong, Crimson Dance are not calculated for 8 stack we have on target, and it's some other missing on flat damage from Double Strike

In this build, you can get powerful damage with Kinetic Blast that fires a projectile from a wand that causes a series of small explosions surrounding its point of impact, each damaging enemies caught in the area.

This build can quickly clean up enemies on the map. The most important thing is that you are immune to bleed and stun during fights. High life regen makes the speed of handling traps much faster.

The build will use Toxic rain as the main skill and possibly a single target if you need to throw one in. It will be poison based and use the new Herald of Agony as well.

With bosses, drop totem and use flasks+vaal haste when you can. As usual with Cyclone make sure to not lock yourself into the animation when a boss does something particularly nasty.

This build will work on a lower budget, you will still have good es, damage and immunities, but obviously the more you have the better. Fortunately the build is so strong that it will plow through the game even with 8-9k ES and lower damage, so you'll be able to farm up currency for gear improvements easily.

This Ice Crash Build can do any boss in any map. Ice Crash attacks an area, converting some of your physical damage to cold damage. The damage is weaker further away from you. Ice Crash requires a sword, mace, axe or a staff, but can also be used while unarmed. More importantly, use this build can get hight DPS and endgame viable!

If you like to summon, like witch, then take a look at the poe 3.8 witch starter builds prepared by PoeCurrencyBuy for the player, including Elementalist, Necromancer, Occultist.

GGG introduce the Tower Defense element into the PoE in Blight. Path of Exile: Blight will launches on Sept. 6